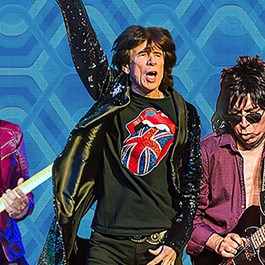 Rock out to your favorite songs with Mick Adams and The Stones®!

Mick Adams and the Stones® have appeared on National Television’s, The World’s Greatest Tribute Bands, as the world’s greatest tribute to The Rolling Stones. Rising above all others in the most demanding role the tribute world has to offer, Mick must be seen to be believed. Mick Jagger himself sent his personal assistant to a Mick Adams and The Stones® show to record Mick Adams and sent back a big thumbs up! Not only is Mick Adams a dead-ringer for Mick Jagger, he brings Mick Jagger’s intense energy to each and every performance.

Endorsed by former Atlantic Records President Jerry Greenberg who said, “It doesn’t get any closer than this!” Mick Adams has every move, every look and every nuance of Mick Jagger down to perfection!

Among their numerous awards, Mick Adams and the Stones have been named one of the top ten tribute bands in the World by Backstage Magazine. The band is a complete recreation of The Rolling Stones LIVE in concert! Mick Adams and The Stones feature all look alike performers, custom made replica costumes, vintage instruments, custom made replica guitars, full choreography, and an incredible media show that accompanies each song.

The energy is through the roof and the band will have you dancing and singing along with every song. The band has become best known for pulling out the theatrical stops by raising the bar for all Rolling Stones impersonators with their wide array of musical and vocal talents.

Each Tuesday, we’re putting $1,000 cash and other exciting prizes up for grabs.

The Sportsbook at CAZ

There’s no better place in the Valley to get in on the action.